This is the last part of the series, final.

If you still haven’t guessed, the model represents the Greek Orthodox chapel on the Neroberg at the northern end of Wiesbaden.

After building the walls at the beginning and then the towers, it is now the turn of the towers at the end. There are many ways to build such domes. I chose the SNOT technique (Studs not on top). Here, 6 identical elements are assembled to a cube using stones with pins on the side. However, the parts are not flat but arched, so that a ball is formed. I have incorporated and modified this approach. I do not need a floor and the lid is not needed by pulling up the side walls to a point. 5 domes are needed. Four of them, for the corner towers, have an inside diameter of 5 pins. 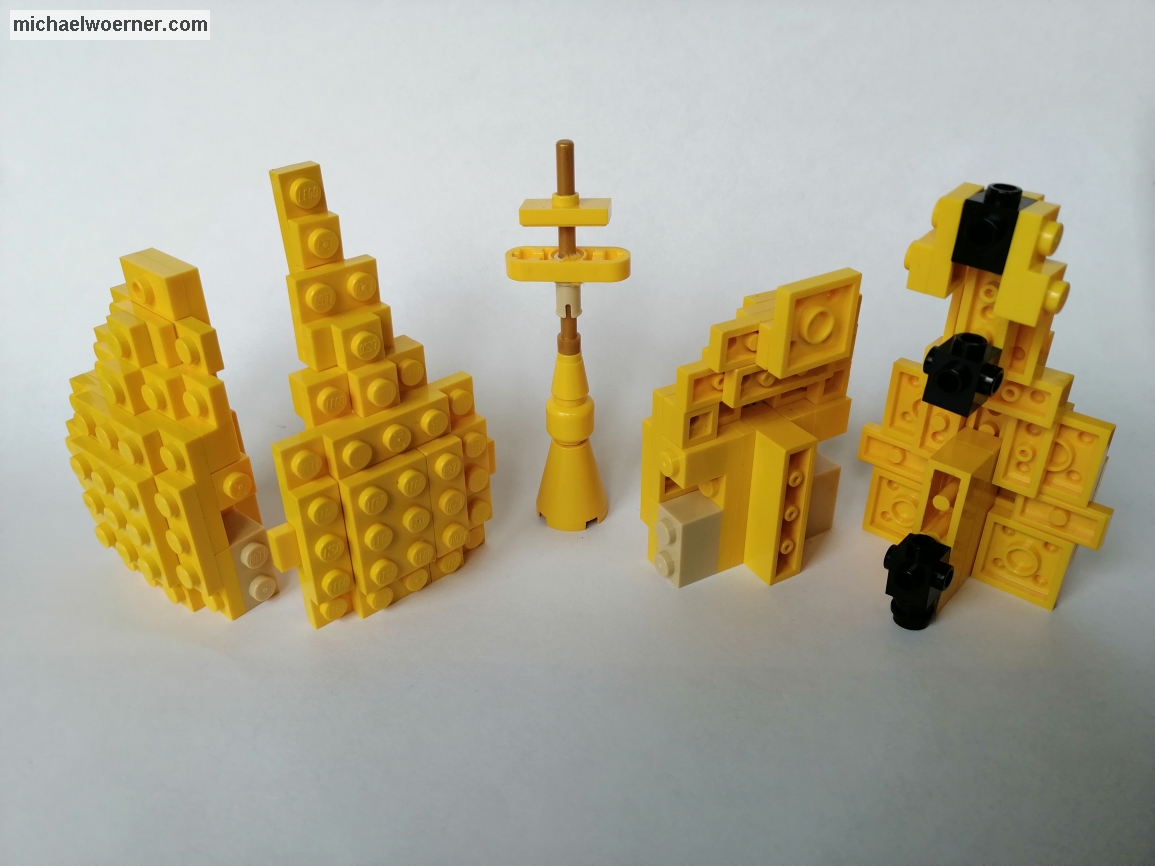 For the large dome with the 7 pins inside diameter the measure does not go unfortunately completely up to the top, therefore no 1×1 brick fits with the pins at the sides (4733) as conclusion. That’s why I have to attach the top differently than the small dome. I was looking for parts with the right dimension to make the resulting gap between wall and axle as small as possible to avoid slagging and thus also to center the tip. I had tried connectors (62462) and bushes (3713) but they are too small. That’s when a technic gear (4716) fell into my hand and it was a pretty good fit. To avoid falling out and to minimize the slagging even more, I put 2×2 round plates (4032) on the axle as a lower end and thus clamped the tip. 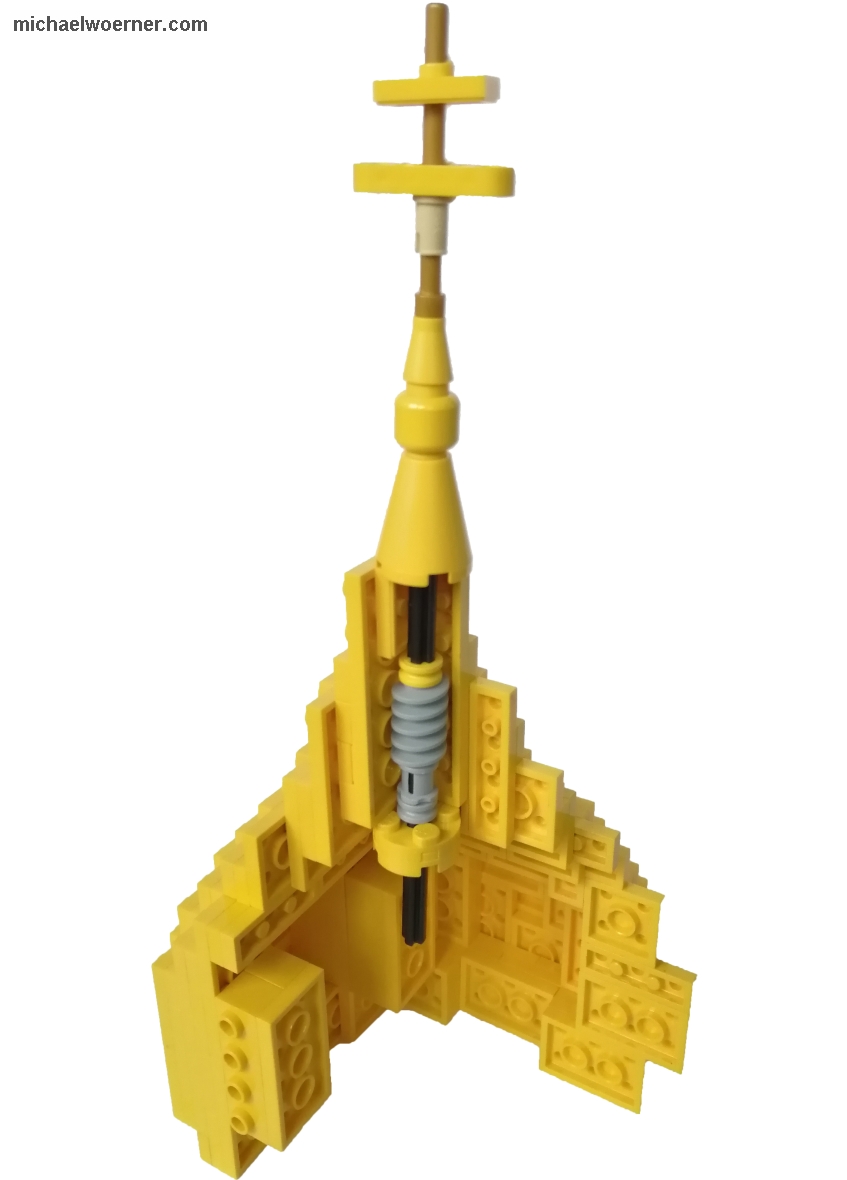 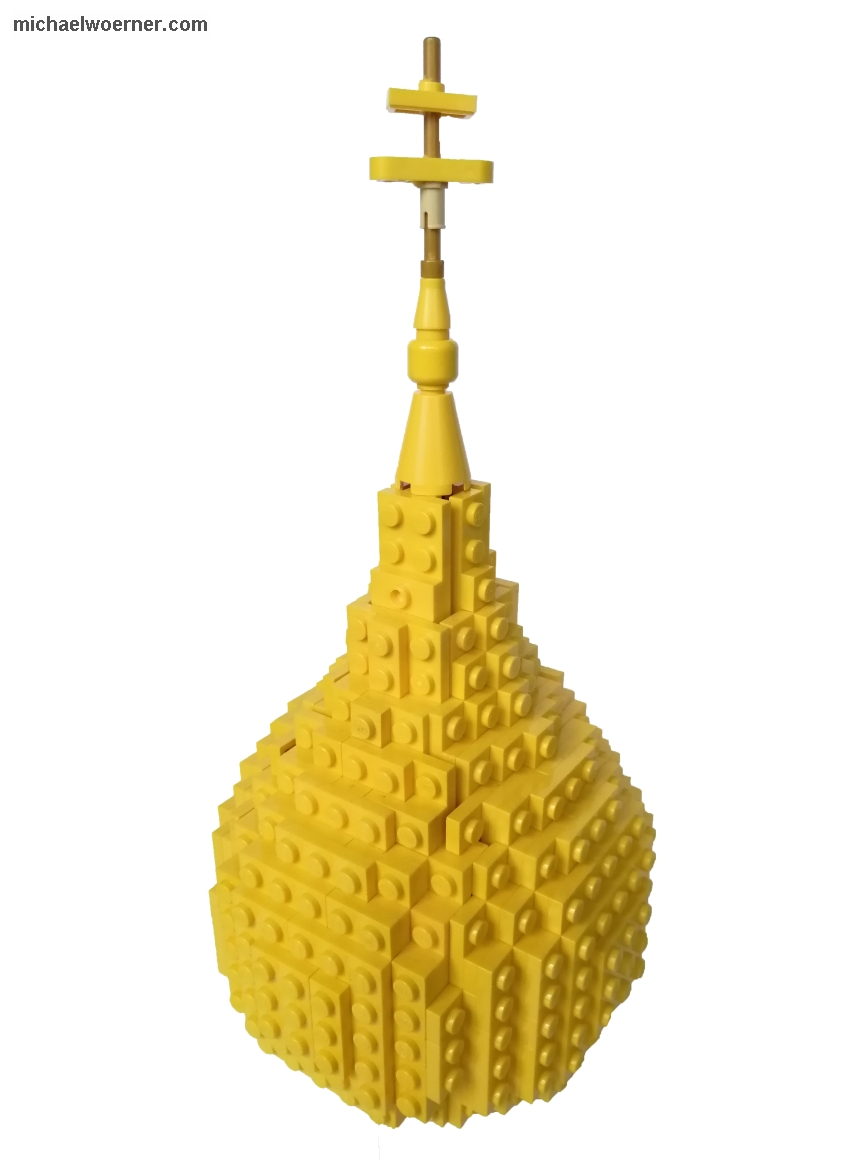 One thing bothers me. Unfortunately, I have not found a better solution. It is against the usual rules, but how else would I implement it? It’s about the Orthodox crosses. These have, in contrast to Christian ones, not one but 3 crossing arms, the upper one being smaller than the middle one and additionally an even smaller, oblique one at the very bottom. This is impossible to implement with Lego® means in my scale. I decided to leave out the slanted bottom one. The middle one is a thin 1×3 liftarm (6632). This one has a receptacle in the middle to put the bar through and fits pretty well in size.
The crossing arm above it should be smaller. There would be a plate 1×2 or similar in dimension best. Unfortunately, there is nothing that is yellow or gold colored that has these dimensions and a matching hole in the middle. After much thought and hassle, I drilled 1×2 Jumperplates in the middle and put them on the bar. This is my solution until I find something better or Lego launches a corresponding part. 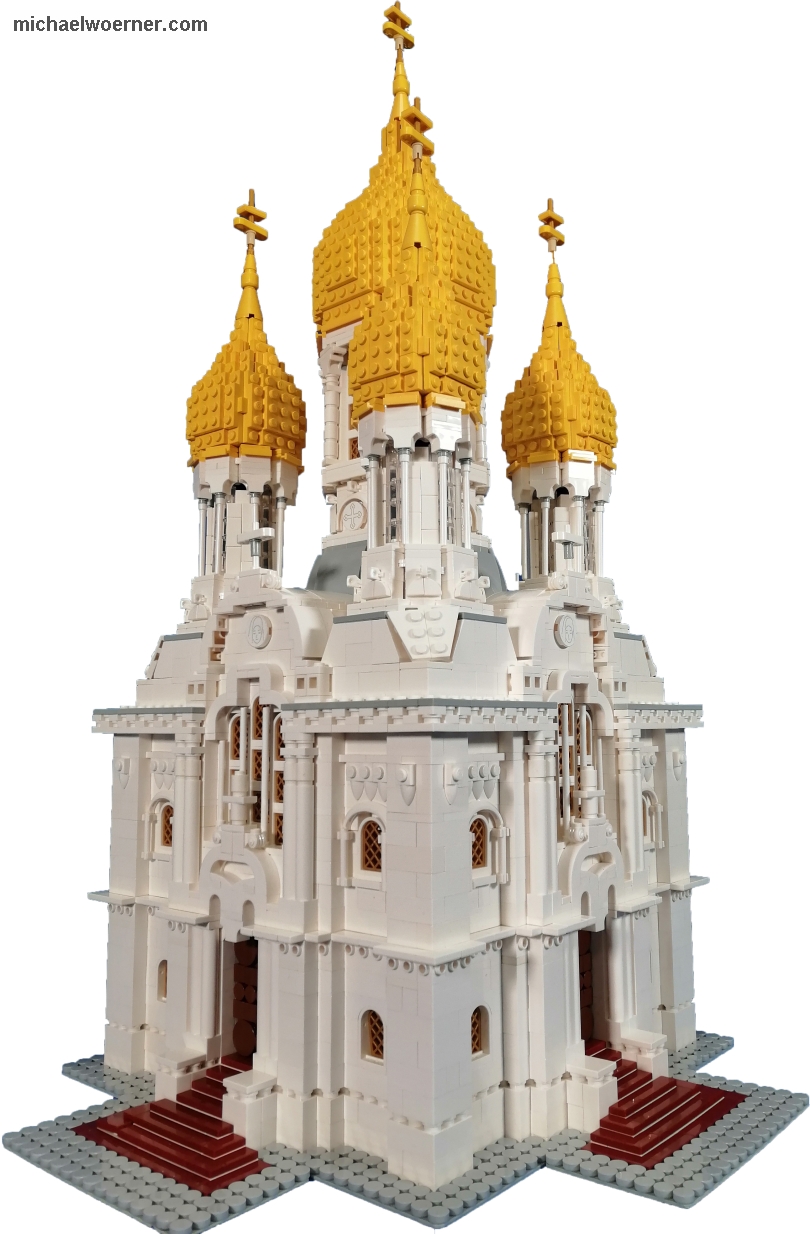 Now a few more numbers about the model. The construction time was about 90 hours spread over 4 weeks and I installed about 5500 parts. The scale is about 1:70.

Now there’s only one thing left. I hope you enjoyed the show. Feel free to leave a comment. I also welcome criticism and suggestions.

Maybe I’ll see you at an exhibition
Michael